This ’37th’ round of 2013 took me through historic German Valley on a beautiful warm Spring day. The roads go up, the roads go down in these parts, but it seems like one spends more time pedaling ‘up’ rather than down!

This part of Morris County, NJ was originally settled mainly by the Germans of Saxony, though much immigrated from all parts of Deutschland as well. The area is dotted with churches and farms from the early 1700’s. Lutheran, Presbyterian, Moravian, Reformed and Episcopalian to name but some. Today, many churches from the 1700’s still stand and many farms still operate in German Valley.

Many of the streets, landmarks and farms in the area still retain their German ancestry and namesakes. Ort Farms is one of my favorite places to stop and grab some fresh
produce and a bottle of water along the way…a friendly staff (mostly the ort family) and great views of the Valley floor are the standard fare.

Of course one of the most famous landmarks is Schooley’s Mountain, which I have
ascended many times, but today I was plunging down the mountain. Only to be slowed by a trio of inept das auto drivers! Though I did ascend two big climbs today, within the
Valley. First up was N 4 Bridges Road. It may only be .72 in length and 370′ up, but it has an average grade of 10.5%!

From there I wound my around to Naughright, 1.2 miles long, with a 7.5% mean gradient, rising up 495′. While not ‘euro’ tough stuff, still pretty decent climbs as far as gradient goes… 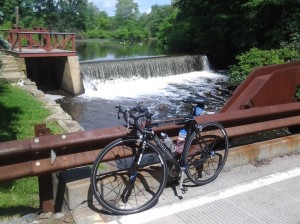 I did hit two other fairly significant climbs as well, one prior to rolling into German Valley, which was the 3.5 mile long Old Chester Rd and one on the way home, Mt Paul. And of course, Liberty Corner to close out the day. Unfortunately, I found myself struggling mightily up all of the climbs except Mt Paul today. I was barley able to keep going up
N 4 Bridges and was sucking every breath for precious oxygen…Then going up Naughright, the sun was beating down, heating things up just that extra bit more.

Even though I was grinding it out, I had to remind myself how great the day was at that moment. The blue skies, layered with the images of story-book clouds. The passing landscapes lined with greenery and flowers, the sounds of Spring…morphing into Summer.

But for some reason, my fitness level has degenerated at bit. I was climbing fairly well during April and May, but a few weeks ago I started to notice my ability to wane…and, I have no real solid answer as to why- yet.

All in all it was another great day in the saddle, enjoying life and the bike. The struggle, the scenery, the risk and the reward…

6 thoughts on “Valley of the Saxons”