03/04/2014–
Testing of the R-002 Carbon Supersport continued today, with a 29 miler around Glacial Lake and Bernards Twp. I was able to sample a variety of roads with a couple of small climbs thrown in as well. So after the short initial shakedown run last week, I was able to ascertain a basic setup. My impression today was that the bike is stiffer than my Pro-Lite carbon, but the R-002 also rides slightly harsher, the frame/fork is, less ‘compliant’. Now, I don’t know if it is due to the carbon layup and/or weave or solely down to the CF wheelset or a combination of the materials, frame/wheels. The pro-Lite has aluminum wheels, so it is not a direct comparative analysis. The efficiency of the power output is noticeable without question. I’ll put that down to the beefier downtube, BB and the carbon crankset.

As I had mentioned in my last post, the R-002’s steering is what I would describe as a bit nervous or ‘twitchy’ compared to my PL. I did have more feedback today, and what I felt was that at low to lower speeds, the steering is quick and precise. But above 15-16 mph, it becomes less precise and not predictable. The front end feels a bit less stable at higher speeds, which does not inspire confidence on descents. I have concluded that the Trail on the PL is slightly longer than the R-002’s Trail. That partly explains the less stable steering feel. This is something I will need to sort out, or at least find a compromised setup that fells a bit more stable.

I think I have a good understanding of how the bike works now, so I can start to analyze the data and play with some of the settings. First, I plan to lower the stack height under the stem, (which will in effect ‘shorten the axle-to-bar distance, this is more for comfort and arm reach) I will then increase the stem length from 80mm to 90mm, which will moreover shorten the distance between the front axle and the center of handlebars. I could (and might experiment later in the year) also change to a different profile tire as well. Ultimately I have to improve the bikes setup if I want a similar feel and stability I enjoyed with the PL.

The Rake, or Offset is fixed from the steerer tube and stock fork, so even if I thought about changing to a different fork, there would be no measurable difference- unless the fork was either longer or shorter (in my situation I would want a slightly longer fork, in which case the trail would then change as well. I’m sure I will be able to affect the steering with some other above mentioned stem length/height adjustments, to what degree remains to be seen. 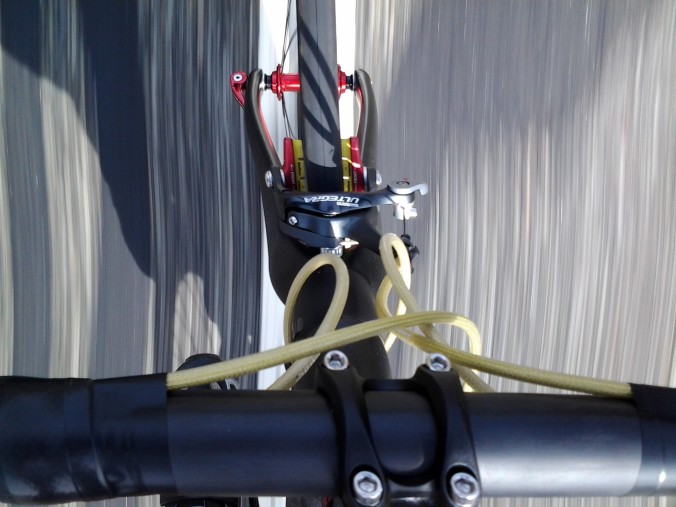 Putting the R002 Supersport through its paces…

As far as the machine ‘rolls’ I have to say, it does so with less effort than my PL. Again, I’m not sure if that is strictly due to the wheelset and hubs or the overall package. But as most riders have echoed, the bike seems to ‘spin up’ better or more efficiently. It is tough to perform a side-by-side comparative analysis of two bikes (even though they are both carbon) when the wheelsets are vastly different.

It will be very interesting to see how the bike performs on long rides with significant ascents and descents. Hopefully the weather breaks for the better, so I can get in some 40 to 60 mile jaunts and adapt to the R-002’s geometry. The first 100 mile ride will be on June 5th, in the Revolutionary Ramble out of Madison NJ. I’ll do a 500 mile review on the bike when I hit that mark. Hopefully by June. Right now, I would grade the R-002 a C+, with the hopes that it
attains a B or better…