As the riding season winds down (at least for this fair weather rider) I am still not completely content with the quality of ride compliance and certain aspects of handling from the R-002. Enter the on-going efforts to refine the machine and its set-up. So to this end, chassis package development continues on the Archetype-X  R002 in order to find further improvements in both performance and comfort.

While iteration three now incorporates a 100mm length stem but with only a 5° rise. The stack height is now 24mm’s, being that the change was made from a 17° rise to a 5° rise stem, I then swapped the spacers from top of the stem to the bottom of the stem.  This change was implemented in order to keep the drop from the saddle tip to the top of the bar at the preferred 2.5 inches or 63.5 mm’s. 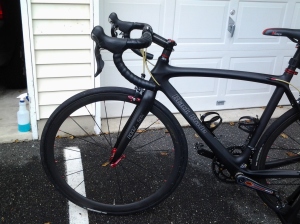 This 100mm length stem further shortens the gap between the front axle and the center of the bar, which has effectively ‘slowed’ the steering down a bit more. (by increasing the distance/turning arc of the bars)

The Washington Valley Loop through Watchung and Martinsville hosted the one-day test session. Subsequently, after the 30 mile run, the expected positive results of the modifications made were indeed confirmed.

These stem and stack modifications and slight changes in the saddle position settings now provide even greater stability while affording me the luxury to carry additional entry speed into the turns when descending and cornering fast. The bikes initial twitchy/nervous steering is now completely gone. The Vittoria shod R-002 feels planted and rock solid on fast descents or when cornering quickly. (albeit only on smooth roads though)

As is often said, proof is in the pudding so to speak…I was able to garner the top spot in a local descent. A fast, technical right-left-left combo with the first right and then left being blind. From the last time I had ‘pushed’ it through that section, a -14 second improvement with a 32 mph average over the 0.7 mile run were the end result.

This was yet another step of continued bike/chassis development, to try and find a better handling balance, though there is only so much one can do without changing the fork- since rake and trail are basically fixed. My disappointment with the bikes ability to absorb and soak up road abnormalities and bigger bumps has been no secret, but at least now the handling is all sorted out.